Having partially regained a power of second sight that he’d once possessed but lost, Jaymi Peek uses this ability in a live weekly television show online, where he channels onto the screen those unexpected places, hidden colours and hatching plans that he can perceive throughout New York City. He applies this sight to the task of relocating his old friend Scorpio, who has gone missing, but succeeds in catching only a glimpse of him in some unidentified corner of the city’s underbelly.

Across a subway station, Jaymi notices an unwelcome visitor from his and Scorpio’s past – Kev Banton, who has now become a prominent evangelical preacher intent upon a moral cleansing of the population. Jaymi tails Kev discreetly through the subway, and is surprised when Kev’s journey ends at a waterfront waste ground in an industrial corner of the Bronx, where Kev slips out of sight amid an odd hum of underground engines…

The monstrous population beneath this waste ground, and the malign purposes for which the preacher and his wife have been feeding it, are revealed in the course of a triangular cat-and-mouse pursuit involving Jaymi, Scorpio and the preacher. This unfolds in Scorpio’s physical pursuit of Kev through the crackle and night-pulse of the streets, from Times Square to the marginalised fringes of the city; in Jaymi’s psychic pursuit of Scorpio, whether streaking up high through the skyscrapers’ shine or secreted on a tanker as it rattles through the Bronx; and on screen, in the colourised shimmer of what Jaymi broadcasts live.

In its rollicking journey through these hidden planes of New York, to the simplicity and sensuality of its ending, Apricot Eyes is a blast of fun that trumpets boldness, tolerance and voltage, celebrating the mystery and dangers furled just behind the surface of the everyday. 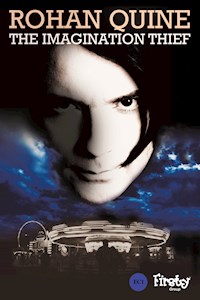 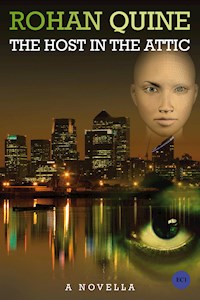 The Host in the Attic
Rohan Quine 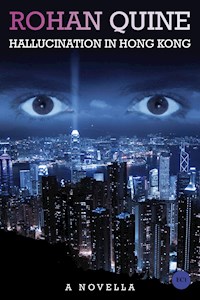 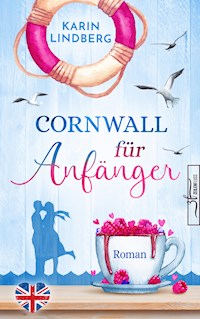 Reviews of Apricot Eyes and Rohan Quine’s other novellas

The following are reviews of Rohan Quine’s Hallucinations (New York: Demon Angel Books), a collection published in print in the USA only, which included earlier versions of Apricot Eyes, Hallucination in Hong Kong and a few chapters of The Platinum Raven.

“I have now been reading Hallucinations with great pleasure [...] you are indeed a star.”

“He has no equal, today or tomorrow.”

“Sometimes Quine succeeds with things you wouldn’t think language could do, like describing a piece of music with an extended metaphor that reads something like watching the last half-hour of 2001.”

“Hallucinations at the end of this millennium is what Lautréamont’s, Huysmans’s and Wilde’s work represented at the end of the 19th century [...] a sadistically svelte structure on top of explosive, primal content that refuses to behave in a linear fashion. It can only be described as literature that strains between ecstasy and bondage [...] one of the chic-est, most provocative things we have read in years [...] one of those seminal works that goes on to be accorded the status of a classic.”

“The imagery is Apocalypse Now-era Coppola meets Wes Craven, or Edward Scissorhands meets Barbarella [...] or Anne Rice (as screenwriter) on an acid trip [...] the lilt and cadence of prose poetry laid end-to-end, resulting in a narrative that is frequently stunning [...] sublime verbal renderings of the emotions and sensations of human love.”

“Most taut and clever in [Apricot Eyes]; it grips the reader and gives a provocative ride [... Hallucinations] develops ‘alternative’ characters with style and dimension, as well as challenging traditional forms of storytelling with admirable results.”

“This is quite an extraordinary work, distinguished both by its originality and by the strength of [its] voice.”

This novella Apricot Eyes is available in print at most online retailers, within the paperback collection The Platinum Raven and other novellas published by EC1 Digital, which also includes:

The Host in the Attic

An earlier version of this novella appeared, with the same title, within the paperback collection Hallucinations (New York: Demon Angel Books), published in the USA only.

Other ebook titles by Rohan Quine

I twist on the sill and swing my legs through the window, my heels against the bricks twenty floors above the street. Fanning in from points to right and left, running parallel and north to convergence ahead of me, the Avenues of Manhattan shoot away dead-straight, each one a groove cut deep through the city by a carving of metal, rubber, grit, frost, feet and dancing rain, lit in green and red and amber.

Amber makes me think of Scorpio, whom I’ve not seen in months—not since he succumbed to the cocaine addiction that ended up causing him to lose contact with many people including Alaia and me. His habit had begun in that nightclub tower in the mountains, which I glimpsed across the desert when I visited the Chocolate Raven in Dubai last year. Then when that whole scene came to an end, propelling him back here to New York, his addiction worsened until at last we lost track of him altogether, despite various efforts to find him. Recently, however, I met someone who knew of Scorpio and had heard [...]