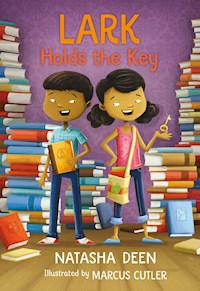 It’s the third day of summer vacation, and Lark’s halmoni—that’s Korean for grandmother—has promised to take Lark and her twin brother, Connor, to the library. Only trouble is, they arrive to discover that the town librarian is missing her key to the library. Lucky for her, Lark just happens to be a budding private eye. Can rookie detectives Lark and Connor solve this mystery and recover the lost key?

Lark Holds the Key is the first book in the Lark Ba detective series. 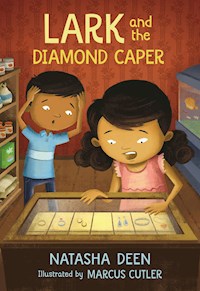 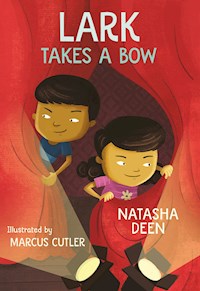 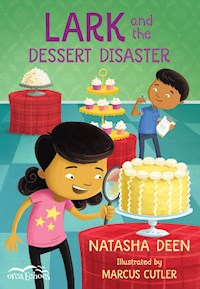 Summary: In this early chapter book, rookie detectives Lark Ba and her twin brother, Connor, come to the rescue when the town librarian misplaces her library key.

My name is Lark Ba, and I have ants in my pants. Not really. That would be gross. And not so much fun for the ants. Ants in my pants means it’s hard for me to sit quietly. It’s something my halmoni—that’s Korean for grandmother—says when I’m really exsited exceted excited. Only I wasn’t sitting—I was lying down in bed. Waiting. Patient-like. Until…

“Psst. Connor.” I leaned over and looked at the bottom bunk. “Connor, are you awake?” Connor’s my little brother. He’s much younger than me.

I sighed. “Yes. If I was sleeping, I wouldn’t be talking, would I?”

I ignored that. “Are you excited?”

“Yes. Today is going to be awesome.”

“It’s going to be the bestest day ever!”

“Lark, you say that every day. Anyway, bestest isn’t a word.”

I sighed. “It should be. It’s a great word.” I love words. Maybe I should be a writer when I grow up. Then I could make up great words like bestest. I turned on the lamp and said, “Yep. I’m gonna be a writer. Then I’m gonna make bestest a word.”

“Lark, gonna isn’t a word either. Anyway, I thought you were going to be an actor.”

“I think I’ll be both. That way, I can write the stories I want to act in.”

I decided to be patient because he was just little. I climbed down from the top bunk. Today was the third day of summer vacation. On the first day, Connor and I started a circus. We tried to teach our dog, Max, how to dance. He wasn’t so good at that. And we broke two lamps. Mom said we had to do something else. Something that didn’t include Max. Or her lamps.

Yesterday, we tried to do a people-only circus with our friends Kate and Franklin. No lamps were broken. But Franklin tried to do a special jump. He jumped great. But he also made a hole in the wall with his head. Dad said no more circuses. He used his grumpy voice. And that’s when Halmoni suggested we all go to the library instead.

Only Halmoni didn’t call it a library. She called it The Temple of Secrets. She said books contained secrets between their pages. And when you read a book, you could find all kinds of treasure!

“I’m going to get fifty books,” I told Connor.

“I’m going to get a hundred. Do you think Mom and Dad will remember to take us?”