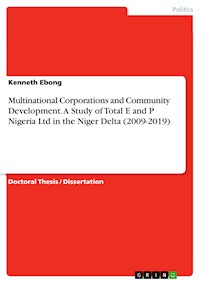 Multinational Corporations and Community Development. A Study of Total E and P Nigeria Ltd in the Niger Delta (2009-2019) E-Book

Doctoral Thesis / Dissertation from the year 2021 in the subject Organisation and administration - Public administration, grade: 68, , language: English, abstract: Multinational Corporations (MNCs) have overtime been involved in community development process of their host communities. How CSR and its attendant MoU which the oil MNCs entered into with the host communities should be defined and implemented has been a contentious debate among scholars and development practitioners. In Niger Delta region of Nigeria, the failure of the government to meet the development needs of the communities has made them to depend largely on the oil MNCs to fill the development gap. Total E and P Nigeria Ltd is one of the major Oil MNCs in the Niger Delta with major operations in Akwa Ibom and Rivers States. The company is said to have entered into MoU with its host communities. The question is, how has the company contributed to the development of these communities through its CSR/MOU policies? Consequently, this study was guided by four research questions and four null hypotheses. The study is anchored on two CSR theories: the theory of participatory development and the Stakeholders Theory by Freeman. The research design adopted was mixed methods research which entails quantitative and qualitative methods involving survey and archival as well as utilizing Questionnaire, In-depth-Interview, Focus Group Discussion (FDG) and Observation were used as instruments for data collection. The study revealed that there is no variation in the strategies of Total E and P Ltd in community development in its host communities in Akwa Ibom and Rivers States; that the company adopts the strategy of entering MoU with the host communities, mobilization of local resources such as the use of local skills and contractors, that the rate of the involvement of the local people in the CD process is low, that the company has been able to fill the infrastructural gap in the host communities through the provision of electricity, health care, educational facilities and scholarships, and supply of portable water.