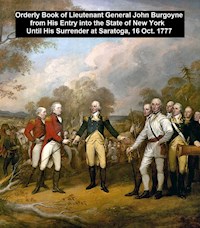 Orderly Book of Lieutenant General John Burgoyone from his Entry into the State of New York Until His Surrender at Sratoga, 16 Oct. 1777 E-Book

General John Burgoyne's personal day-to-day account of his campaign which ended at the Battle of Saragota. Edited by E. B. O'Callaghan As the editor says in his introduction: "In presenting to the Public a volume containing mainly Orders issued from day to day, to an Army on its march, some apology may be deemed proper, were it not that the interests involved in the march of that Army were of such vast magnitude as not only to justify, but to exact the preservation of every record, however trivial and minute, of every well established incident and circumstance connected with its progress and operations. The people of the Colonies had already been two years arrayed in hostility against England; the Declaration of Independence had been nearly twelve months before the world, yet so far from decided was the result of the contest, that no Court in Europe dared as yet to acknowledge that Independence, or to risk a Treaty with America. It was at this season of gloom, uncertainty and doubt, when many good men already hesitated, and some had even despaired, that Great Britain gathered up her strength afresh, evoked her power at home and exerted her influence abroad, for one combined and overwhelming movement that would, she promised herself, forever crush the giant nation struggling to be born."