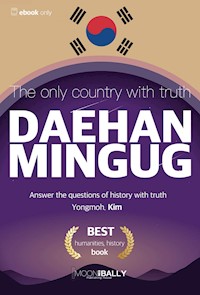 The Only Country with Truth - Daehanmingug E-Book

Through this book,
∘ Why did the Big Bang occur?
∘ Who am I?
∘ Why were humans created and how are they born?
∘ How should humans live?
∘ What is God?
∘ What is god and what is his relationship with God?
∘ What is reincarnation and why? etc. will be proved.

The only country with truth, Daehanmingug.

Ⅲ. This is the big bang

1. Written by a Science Columnist

2. A world without the big bang

3. In Daeuju, there is a protagonist who is the subject of operation.

4. Events caused by the main characters

2. What are the three Giuns declared by the God Code called?

3. Sins (Ingis) must be normalized

7. This Is the Birth of Man

9. This is the heart

10. Reincarnation is done by the gods

12. Now, the last reincarnated Ingis (Sins) have come to this land.

13. Decommissioning the universe and returning to Daeuju

Yoon Won-gu (1922-2017), a former professor at Myongji University, said, "Socialism (communism) in the world is in many cases nothing more than a hoax than the truth. As long as we stay at this level of public opinion, the truth is simply unknown." He added the following words. There are occasional cases in the world where extremely misunderstood and distorted things (opinions) are used as if they were true for a long time without any reflection being examined and controlling people's thoughts.

Now, if we do not go beyond the frame of our own thoughts and knowledge or the walls of our thoughts, we cannot see the bigger world and we cannot create a better life.

In John 8:32, it is written, “You will know the truth, and the truth will set you free.” I think of this freedom as freedom from hardship, sickness, death, praying, clinging to, and living in bondage. It is thought that the reason mankind is still groaning from these things is because they have not met the new truth.

There is the last Hermit of mankind. He said the following: ‘Ask anything in the universe.’ This book introduces the laws of nature that he has learned, and introduces the original code that he solved. These will become the vaccine of the pandemic, the cure for the stuffiness and melancholia and paranoia, the light and salt in the times of chaos, the truth for all humans, and the law of all things. Let's call that code 'God Code'.

According to a widely known anecdote, Newton discovered the law of universal gravitation when he saw an apple falling from a tree. However, it is difficult to ascertain the exact facts, and the general view is that Newton would not have made a historical discovery only by looking at a falling apple. In the same way, however, we want to find out through natural and social phenomena.

Einstein's theory of 'equivalence of mass and energy' is in place. According to this theory, mass and energy are the same concepts, so mass and energy are proportional. In other words, matter is energy and energy is matter. So, what kind of energy is there in the universe? First of all, there is a molecule composed of various elements, a gas composed of molecules, and a mass of energy such as gasoline. In addition, the body energy made of 26 elements is energy, and every product made of human material is energy. However, there is a difference in energy size depending on the purity of the material.

This concept alone cannot explain all the phenomena that work in space. Therefore, it is necessary to expand to all areas of energy (power), even if it is not matter, to explain what happens in the universe and in human society.

This law of mass has a special property.

First, when we see each other in town, in school, at work, in social activities, we see each other playing. There is an old the saints's saying that there are many words if they don't communicate with each other. And water and oil do not mix. As such, all the tangible and intangible energy in the universe is fused and lumped together at least 30% of the mass equal to purity or density, becoming a force, creating a planet (a star), and falling if it doesn't fit. This is called homogeneity or equivalence of the law of mass.

Second, there is a time difference depending on the amount of money or gold hidden in the wardrobe of the house, but as time goes by, whether the child is taken away, the thief takes it, or the swindler is taken away. That's why the world says it's money that goes around. Also, why are the phenomena and activities such as going to higher schools as humans grow up, being promoted from companies, moving companies, moving, looking for mountains and the sea, and traveling? Animals move in search of food, but humans are made to move in time, as much as they have learned and grown. On the other hand, if you don't have that much mass after time, you will either sink or collapse. This is called mobility of the law of mass. On the other hand, all mass-knowledge, theory, and civilizations of the Earth gather at 37 degrees north latitude from the southern and northern ends of the west, and move eastward along this line as the mass increases. This line is the Silk Road and the eastern end point is the Korean Peninsula.

Third, large droplets absorb small water chambers. Although the magnet is invisible, the magnet with a large magnet boils down to a small magnet. The Earth, which has a massive mass, attracts all objects to the ground.

Many women are attracted to luxury goods, turn their eyes to handsome and muscular men, want to dance Bruce, and become big fans of handsome male celebrities, politicians, and celebrities. Men also buy luxury foreign cars, saying they are men's pride, drooling when they see pretty women in the S-line, and even kings of the dynasty fall into beauty, they don't know even if the country is dizzy. Nowadays, it is called "femme fatale." In other words, the energy mass in comparative advantage called "Gab" attracts inferior energy called "Eul." This phenomenon is called pullability or absorbability of the law of mass

On the other hand, another phenomenon should be considered. A beautiful and famous person means that the basic mass (energy) is good and big. That's why they gain public attention, cheers, and popularity. The cheers and popularity they receive are also non-material energy. Famous entertainers, famous players, famous actors, and famous singers are often not good in their later years even though they receive this public energy. Why is this happening? If the celebrity and beauty do not raise their mass or play a role as much, the energy sent by the public will unite and hit them. This phenomenon is called hostile absorption based on their beauty and celebrity status. As with this phenomenon, attraction (absorbability) acts on the non-material energy mass. It is the same principle to fall into religious groups, ideas and ideologies. The magnitude of the energy mass per unit is greatest in truth, followed by knowledge, and the lowest energy mass is matter (money).

This energy mass has a working principle. Until 2012, the knowledge, talent, and money used for oneself did not go against nature's reason. However, it changed from 2013. Gab, which has a comparative advantage in each field, should use his knowledge, talent and money correctly for the inferior 'Eul'. 'Eul' should be grown with the energy of 'Gab'. "Gab" should not be disdainful of "Eul," and "Eul" should not be treated against "Gab." This is a mutual obligation. This is called the 'Principle of Gab and Eul'. Come to think of it, each society is full of tangible and intangible energy. The degree of contamination (purity) of the social energy and the amount of mass it has are determined by the level of its members.

This phenomenon is because there is a law of 3:7 (3:3:4) that acts on all tangible and intangible energy masses. This law is a self-acting law of the universe, a law of birth and annihilation, and a law of creation. Therefore, it acts on all areas of human life (daily life, children's education, business, investment, corporate management, state management, reform, etc.) and all elements and substances.

Also, all energy is composed of three stages and acts in three stages. There is a principle that works at each step. The moving period is a single or multiple of 3, 7, and 10 units (day, month, year).

In physics, there is a lot of controversy about whether light is a wave or a particle, but light has both properties according to this law. And all tangible and intangible energy masses are generating electromagnetic waves.

3. The law of nature, three