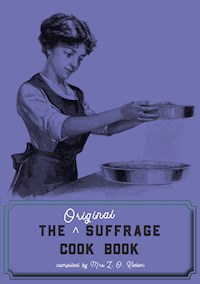 As featured in The Guardian - Superb edition of this historic gem!


Celebrate the centenary of women getting the Vote by cooking and eating some of the Suffragettes’ favourite meals.


Dozens of vintage recipes contributed by some surprising supporters of the popular cause, including famous writers, governors and even a judge.


With none of the fads of modern-day cooking, these simple recipes range from hearty breakfasts to healthy soups, salads and meaty casseroles, alongside witty contributions such as Pie for a Suffragist’s Doubting Husband and the Dumplings That Never Fail. Choose between the many tasty desserts such as Suffrage Angel Cake or Devil’s Food to enliven your party.


Why not devise your own Suffragette Menu with recipes like Blanquette of Veal or Sweet Potato Soufflé? And don’t forget your Creole Balls! You might follow that up with Parliament Gingerbread or Strawberry Shortcake á la Mode. To top it off, why not toast the Suffragettes’ success with a Peppermint Cup or an Albuminous Beverage?


Originally published in 1915 to help raise funds for the campaign for the vote for women.


History and fun all in one book!


This new edition includes vintage illustrations and short biographies of many of the contributors as well as a new endnote by award-winning writer Cheryl Robson, which places the book both in its historical and contemporary contexts.


Born in Freeport, Pa on April 4th,1867, she moved to Pittsburgh where she lived for 40 years and was often referred to as Pittsburg's 'most interesting woman'. She devoted herself to public works and was years ahead of her time, organising food relief and garden projects in the city's slum districts. Initially opposed to women having the vote,she was converted to the suffrage cause by Mrs Henry Villard, the daughter of William Lloyd Garrison, a famous slavery abolitionist.


She wrote to many famous men and women to collect the recipes for The Suffrage Cookbook which she published in 1915 to raise funds for the suffrage cause. Theodore Roosevelt was the only man who failed to send a recipe, claiming that he was too busy to do so.


Following the success of the campaign for the vote in 1920, she became the director of the Allegheny County League of Women Voters.


Cheryl Robson (editor of new edition and author of afterword)


Cheryl is the founder of Aurora Metro Books. She has won numerous awards for her plays, books and films.


She decided to revise and re-publish Kleber's 1915 Suffrage Cookbook to coincide with a touring exhibition that she had produced about the suffragists' campaign for the vote in the UK. Titled 'How the Vote was Won', the exhibition toured to libraries, museums and theatres in southeast England in 2018, the centenary of some women gaining the right to vote in the UK.


“It’s a fabulous historical document of its time but also an interesting cook book to boot, interspersed as it is with line drawings and including letters to the editor – or Editress as she is described  in the contents section of the book. Recipes aside this is a great gift idea. It’s both practical and fascinating on so many levels and I’ll be trying out more of the recipes over time. A unique way to celebrate the centenary of women getting the vote.” – Frost Magazine


“The recipes in the compilation run the gamut from simple soups to fish (Virginia fried oysters and ‘shrimp wriggle’ both make the cut), meat (the baked ham à la Miller is described as “a dish fit for the greatest epicure”), breads and puddings, the latter section incorporating a series of “admonitions” directed at “those who would excel in cake making”.


As the writer Cheryl Robson observes in her endnote, “most of the contributors to this cookbook are long-forgotten but their legacy survives today in the spirit of social activism that inspires others to work for a better, fairer world”.   – Town and Country Magazine


“Giving Jamie Oliver and Nigella Lawson a run for their money, the cookbook includes a wide range of soups, salads and casseroles. Drinks also feature, from the “Peppermint Cup” to a wide selection of “Albuminous Beverages” (“When a large amount of nutriment is required the albuminized drinks are valuable. The egg is a fluid food until its albumen is coagulated by heat.”)


Kleber, however, writes in her foreword to the book that “as it is a serious matter what is put into the human stomach, I feel it incumbent to say that my readers may safely eat everything set down in this book”.


She does add that, while she has tested most of the recipes herself, “it being a human Cook Book there will likely be some errors, but as correcting errors is the chief duty and occupation of Suffrage Women, I shall accept gratefully whatever criticisms these good women may have to offer”.  – The Guardian