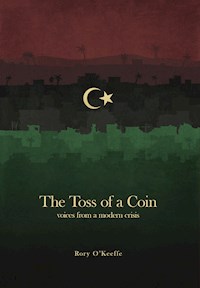 The Toss of a Coin E-Book

The Toss of a Coin – voices from a modern crisis is the life stories of refugees from across Africa and the Middle East, in their own words. It is the story of a Civil War, its causes and aftermath, told by Libyans who fought on either side – and those forced from their homes by a war they could not or did not want to fight.
It is the story behind the term ‘intervention’: the people it affects, and how they respond. It is the story of how Libya has descended into chaos, and how it contrasts with Tunisia, whose revolutionary lead it followed.
Touching on almost every conflict in modern African and Middle Eastern history The Toss of a Coin examines a modern crisis, and where it has left Libya, and tells the story of two continents, united and divided by history, religion, race and ordinary human aspiration.
It is a tale of victimisation, of murder, of torture, and of terror. Of how conflict across two continents forced people from their homes, and of a war in which an horrendous crime was committed, and continues still.
It is a tale of how Libya teeters on the brink of destruction, just a few miles from Europe’s borders.
But it is also a story of hope, of talent, of triumph, potential and humanity.
It is a chance to meet the men, women, and children, the musicians and martial artists, the students and soldiers, the smugglers and the salesmen, the clinicians and khetibas.
To hear their stories – those who crossed thousands of miles of desert sand to reach Libya, and perhaps Europe beyond it, and those who were born there and struggled for change, for things to remain the same, or simply to survive.
To meet the Somalis, the Sudanese children, the students who won the Civil War, the Tunisians and Libyans who worked to save lives and the men and women who fought just to live them.
It is a chance to meet the individuals snared in more than one modern crisis, and read the remarkable stories of how their courage, ingenuity, creativity and desire to live helped them to overcome them.
The Toss of a Coin is a chance not only to learn what makes a war, or how easily states are destroyed, but also about what happens when they are; how people respond to the modern world’s worst challenges, and how, armed with little more than their creativity and strength of will, some survive them.