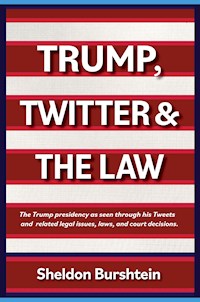 Never has there been a president like Donald J. Trump. In the five years since he announced his candidacy, through Impeachment proceedings and the impact of COVID-19, President Trump has challenged or ignored almost every standard of the presidency. Trump, Twitter & The Law tells the story, often through the President’s own words and those of the courts, of his profound impact on the presidency and America. The topic-by-topic discussion of the related legal issues, laws and court decisions covers President Trump’s approaches to women, his businesses, the media, his opponents, the rule of law, law enforcement, the judiciary, elections, violence, race, abuse of his power, transition of power and the truth. The book considers the President’s policies, including immigration, diplomacy, trade, business, the military, the environment, and healthcare. President Trump’s cyberbullying and his responses to impeachment and COVID-19 are also treated. The book also examines the role of tweets as a presidential medium and as the basis for, and evidence in, lawsuits. The book combines clarity for lay readers with sophisticated content for attorneys.