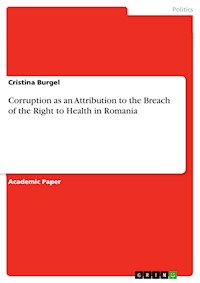 Academic Paper from the year 2021 in the subject Politics - International Politics - Topic: Public International Law and Human Rights, grade: A, Universität of Szeged (University of Szeged), course: International Relations, language: English, abstract: This paper is to tackle the issue of corruption as representing a threat to the right to health, which is being evaluated as the set of the human rights and constituting the country’s duty to guarantee, within the framework of the legal sequel in Romania of the evolution and implementations of national law and international law alike. Notwithstanding the fact that the predicament for the enjoyment of the right to health in Romania is often distorted, but deservedly attributed to the agenda of the underdeveloped social, economic and political context rooted in the socialist past of the country and extrapolated to the contemporary status of the health system, there exists a lack of a comprehensive regulatory approach towards accrediting the flaws of the public health system to corruption. The correlation between corruption and its detrimental effect on human rights does not exhibit a striking facet, however, the erosion of human rights in countries where corruption constitutes a real and palpable problem, such as in Romania, the possible relation between the two phenomena demands a thorough scrutiny which this paper will strive to introduce and demonstrate with the aim of arriving at the conclusion that corruption does not only impact the right to health in Romania, but it does so in an evidently detrimental manner based on doctrinal analysis and normative assessments.