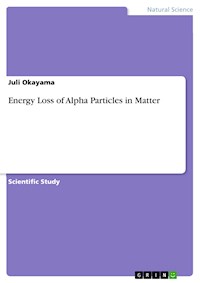 Scientific Study from the year 2019 in the subject Physics - Nuclear Physics, Molecular Physics, Solid State Physics, grade: 0.82, University of Manchester (The University of Manchester), language: English, abstract: Alpha particles, or Helium nuclei, are projected by a radioactive isotope source into a vacuum chamber filled by varying thicknesses of either metallic foils (aluminium, nickel) or gases (helium, nitrogen, argon). A Silicon detector, placed at the opposite end of the chamber, detects the final energies of the alpha particles as they penetrate through the media. It is theorised by the Bethe-Bloch equation that the greater the thickness of the medium in the vacuum chamber, the lower the final energies. Through comparison between the Bethe-Bloch equation and experimental data, the ionisation values for the various elements used can be found. Our preliminary results for one such element, aluminium, demonstrate an ionisation value of I=141.2eV.