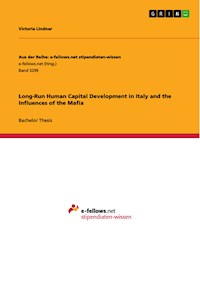 Bachelor Thesis from the year 2019 in the subject Business economics - Business Management, Corporate Governance, grade: 1,3, University of Tubingen, language: English, abstract: This work has the objective to offer a deeper insight in the Italian human capital development in the long run. Hereby, the work is also investigating the differences in development between specific Italian regions. This work is dedicated to research the long-run development of human capital in Italy, both for the country as a whole and regional differences. The author wants to take a closer look on the north-south descent. First, the age data sources, its structure and subsequently the sources and collecting of independent variables in the dataset are described. These independent variables will later be included in an empirical analysis about the connection of human capital and economic development. In this regard, the work will enlarge upon human capital development, especially regarding gender and region. In this section it shall be differentiated between bigger territories as well as the specific provinces of Italy. Then, the impact of different independent economic indicators on the numeracy value will be investigated with a regression analysis. In this context the time period from 1800 to 1900 will be considered more closely because of the presence of the mafia and criminal activities in the south of Italy. An empirical analysis shows if the increased presence of the mafia and criminality is influenced by the human capital value in specific provinces of Sicily, where the most famous mafia organization had its origin.