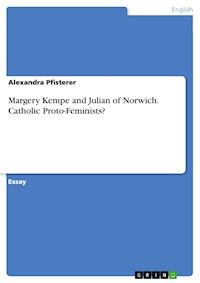 Essay from the year 2019 in the subject English Language and Literature Studies - Literature, grade: 1,7, University of Wales, Bangor (Bangor University), language: English, abstract: Margery Kempe and Julian of Norwich – Catholic Proto-feminists? When thinking of great English writers over the centuries, the earliest female writers who come to mind often are Jane Austen or Emily Brontë. However, there are many extraordinary female writers who often are being overlooked. While exploring testimonies of women’s creativity in a time, when participating at the artistic, creative and intellectual exchange of society was not commonly part of roles and expectations attributed to women, I came across two female writers that I found particularly interesting. The aim of this essay is to introduce these two extraordinary medieval female writers, Margery Kempe and Julian of Norwich, by briefly outlining their biographies and the main characteristics of their writing. Furthermore, commonalities and differences of these two female writers will be defined. Finally, it will be explained why these texts still have a relevance in a broader context today. Beforehand, the key terms of this Essay shall be defined. The term gender is here being used as the distinction of sex and the constructed way of assigning meaning to people and behaviours due to their biological sex combined with this distinction. The most important authority to define gender related views in the here considered period is the catholic church. By devotion, religious devotion in the sense of worship, dedication and strong religious commitments is meant. In order to understand why the two women presented in the following section are so remarkable, it is necessary to consider the position and education of women in mediaeval times.