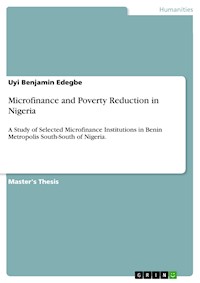 Master's Thesis from the year 2013 in the subject Sociology - Miscellaneous, University of Freiburg (Global Studies Program, Institute fur Soziologie.), language: English, abstract: [...] The poverty question is a global phenomenon. It is perhaps one of the greatest challenges facing Mankind today, especially in most parts of the developing world. This Perhaps explains why the eradication of poverty was listed as the first of the eight issues of the millennium development goals. The problem of poverty is more disturbing giving the fact that there is abundant and enormous wealth in the world to adequately meet the needs of every one. Poverty may be defined as a condition of lack and inability to meet adequately the basic needs of life such as Shelter, food, education and health care. Similarly, according to a United Nations statement: Poverty is a denial of choices and opportunities, a violation of human dignity. It means lack of basic capacity to participate effectively in society. It means not having enough to feed and clothe a family, not having a school or clinic to go to; not having the land on which to grow one’s food or a job to earn one’s living, not having access to credit. It means insecurity, powerlessness and exclusion of individuals, households and communities. It means susceptibility to violence, and it often implies living on marginal or fragile environments, without access to clean water or sanitation.(UN,2008 quoted in Ucha,2010). 2 In other words, the problems of poverty is more worrisome in Sub-Saharan Africa with 47.5% of the people living on less than $1.25 and 70% living on less than $2 per day in Sub-Sahara Africa (World Bank, 2008).The figure may have become worse considering the drought that hit parts of horn of (East) Africa in 2011 and the problem of maladministration or poor governance bedeviling the region. In Nigeria the high level of corruption, poor leadership has contributed to exacerbate the problem of poverty. Ucha, 2010 puts it thus: “Unemployment, corruption, non diversification of the economy, income inequality, laziness and a poor educational system can be considered to be some of the key factors contributing to poverty in Nigeria”(p.46). Given the fact that Nigeria is a country with rich human and natural resources, it is disturbing that majority of her citizens are still very poor. The government has over the years formulated a lot of programs and policies geared towards poverty reduction; however it remains a controversy whether those programs and policies have actually achieved their desired objectives.[...]