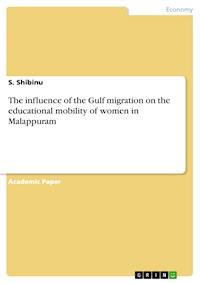 Academic Paper from the year 2017 in the subject Economics - Case Scenarios, grade: 23, , course: MIGRATION STUDIES, language: English, abstract: The main objectives of the study are to understand the level and nature of women's educational attainment in the district between 1981 to 2001, to identify how the Gulf migration accelerated the growth of educational infrastructure and to analyse and compare intergenerational educational mobility of the female population. The age cohort taken in to analysis is women of 20 years and above. Both secondary data and primary data were used in the study. The analysis of primary data has done through the construction of intergenerational mobility matrices. Export of manpower has already been established as one of the most lucrative industry in Kerala. A good number of economically motivated young people all over the state were motivated to more in the direction of the oil rich countries in quest of their fortune, and acquired further momentum through the liberal economic policies of countries of the Persian Gulf since 1970s. This flow of emigration has never been interrupted, not even at the time of economic recession of 1980s and gulf war during the 1990s. Naturally, in a short while the export of manpower from Kerala became an important component of state revenue and the livelihood of millions. The role of international migration and foreign remittances in the economy of the state of Kerala in India is widely acknowledged. Migration from India has taken place from the very dawn of civilization. There are hardly any parts of the globe where Indians are not found today. From the early years itself, Kerala has largely dependent on its export earnings from agricultural and agro based commodities like tea, coffee, spices, cashew, kernels, marine products, coir and handloom textiles. From the middle of the 1970s, man power exports have been gradually overtaking commodity exports from the state. After independence, there were large scale emigration of skilled, semi skilled and unskilled man power mainly to the Gulf countries like the UAE, Saudi Arabia, Oman, Kuwait, Qatar, and Bahrain.etc. Emigration to the Middle East acquired momentum since 1973, consequent on the ever increasing demand for labour of all categories in the Gulf countries to meet their construction activities following the oil price hike. In this outflow to the Middle East from India, Kerala stands at the forefront.