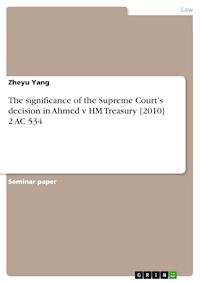 Seminar paper from the year 2014 in the subject Law - Miscellaneous, University of Warwick, language: English, abstract: This essay relates to the case of Ahmed v HM Treasury, the first case that was heard by the newly constituted Supreme Court of the United Kingdom, concerning with the freezing of assets of five men who were suspected of involvement in financing terrorism. It can be conceived as the most influential Supreme Court case to date not only because of its constitutional significance but also because of its raising of issues relating to abuse of executive power, personal liberty and international terrorism. The Court’s confronting issue is of the lawfulness of the Terrorism Order 2006(‘the TO’)1 & the Al-Qaida and Taliban Order 2006 (‘the AQO’) art. 3(1)(b)2, to be introduced by the Treasury under the United Nations Act of 19463 with respect to fighting terrorism by freezing the assets of suspected individuals. Further analysis will be given through explanation over the basic facts and the Supreme Court’s decision, then processes to clarify its significance in national and international contexts respectively, the last section will conclude and draw summary. The major viewpoint is that despite the court’s increasing power in prohibiting unlimited executive power, the decision highlights a shift in power back to the legislature as the court has no power to strike down any irreconcilable primary legislation or secondary legislation authorised by primary legislation. The decision also depicts the court’s aggravating effect at international level in deciding which legal regime to apply in a single case through either constitutionalism or pluralist logic.