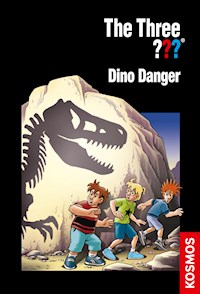 There are strange things going on in the Dino-Park: Are the dinosaur skeletons really coming alive at night? Are they actually threatening the park owner? The Three ??? take on the case and stumble into a real prehistoric adventure! In Rocky Beach, California, live the three detectives: Justus Jonas, Peter Shaw and Bob Andrews. Together, they are The Three ??? and there is nothing they don't take on! The three friends witness exciting detective stories, solve puzzles no matter how tricky, and can always rely on each other. 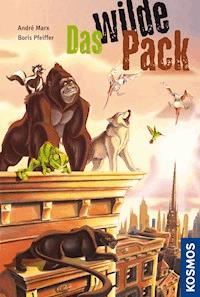 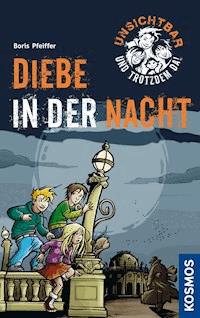 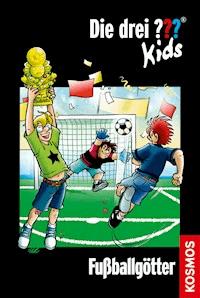 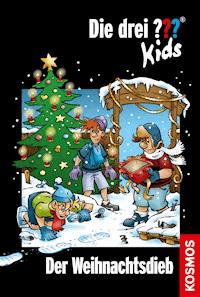 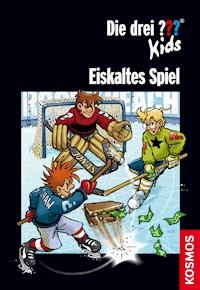 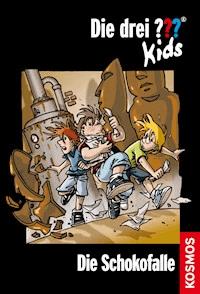 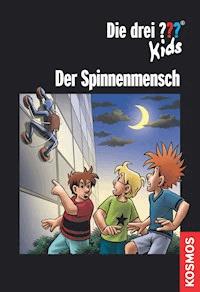 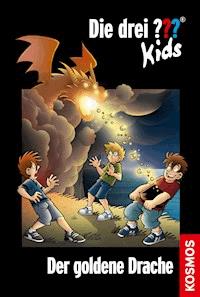 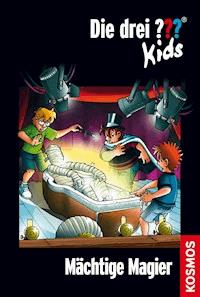 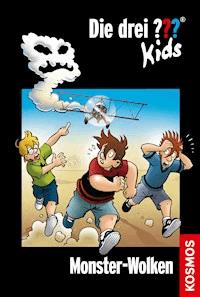 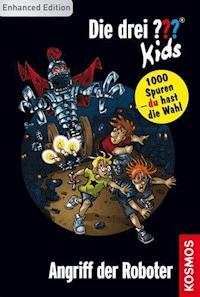 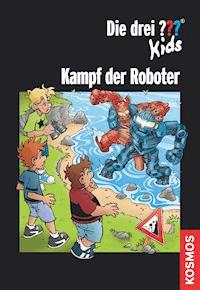 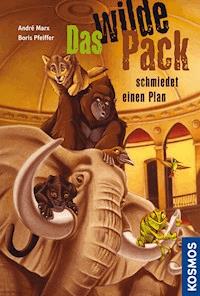 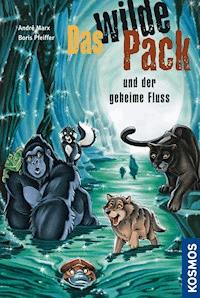 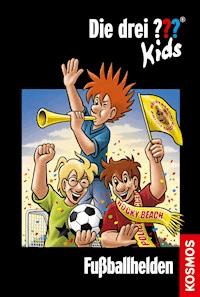 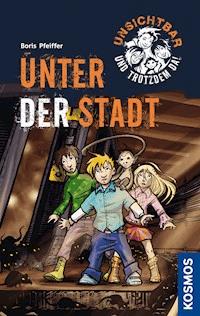 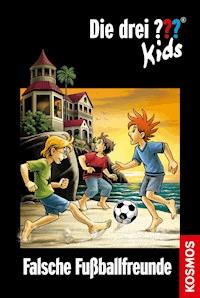 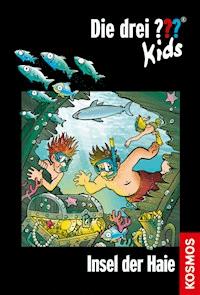 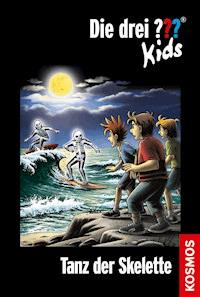 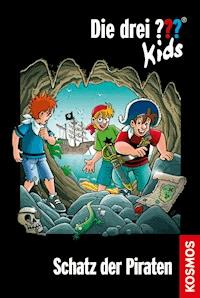 with illustrations by Harald Juch

You can find all our available products and much more

authors and activities at thethreedetectives.com

„The three ???“ is a registered trademark of Franckh-Kosmos Verlags-GmbH & Co. KG

“We’re gonna do what?” Peter Shaw stared at Justus Jonas wide-eyed. “Did you just say what I think you said? Time travel?!”

The leader of the three ??? smiled mysteriously. “If I’m not mistaken, that’s exactly what I said.”

“There’s no such thing as time travel, Justus!” Peter exclaimed. “It may have escaped your notice, but you can’t just travel through the centuries like you can travel to Los Angeles or Hawaii, or did I miss something along the way?” He looked imploringly at the third member of the three ???, Bob Andrews, for approval.

“Of course, you’re not wrong, Peter,” Bob agreed. “But I’m sure Justus is once more going to give us some smart explanation for his assertion, so that he’ll be right again in the end.”

“Our beloved smart-aleck wants to stump us with one of his brainiac tricks again and then laugh his head off because we’re not as crazy as he is when we think outside the box. Whatever, I’m ready!” Peter put his hands on his hips expectantly.

The three ??? stood in front a large scrapheap in Titus Jonas’ junkyard. Justus had lived here in the small Californian coastal town of Rocky Beach with his Uncle Titus and Aunt Mathilda since he was five years old. His parents died back then in an accident. Fortunately for him, he had a loving new home with his relatives.

Justus looked at Peter and his smile got even wider. “Maybe it would help you guys, if I gave you a hint,” he suggested. “The time traveling we’re gonna do is the reward for all our hard work this morning.”

Peter shook his head confused. “We all know that your Aunt Mathilda has cleaning fits, Justus, which is why we have to clean up the junkyard for her every few weeks but normally there is a piece of delicious cherry pie as a reward and not time travel. How did your aunt come up with an idea like that?”

Justus pulled a face. “My clue doesn’t seem to have helped you at all. Anyway, I never said that the reward came from Aunt Mathilda.”

“From whom else, then?” Bob wanted to know.

“There’s not much choice left now, is there?” grumbled Justus. “Seriously, guys, you could work it out for yourselves.”

“Is it from your uncle then?” Peter moaned. “Your little quiz questions are really annoying.”

“They are, but only because you’re too lazy to think. That’s why my questions are good for training your rusty old detective brains,” Justus replied.

“Maybe it just didn’t strike me before that your uncle is a time traveler,” Bob objected. “So, spill the beans, Justus. What’s this all about?”

“Nah, I’m not gonna let you off the hook just yet.” Justus looked at Peter and Bob insistently. “I expect good detectives to solve this mystery. Come on, make an effort! I’ll give you one more hint: The time travel I’m talking about is not the kind you see in a science fiction movie.”

Peter raised his dusty hands and wiped the sweat from his face. “Justus, maybe you could express yourself a little more clearly? We’ve been cleaning up the junkyard for hours, and I’m really exhausted.”

Justus sighed. “All right, Peter. I’ll give you a third and final hint: We’re going on our time travel together with Uncle Titus.”

Bob burst out laughing. “Now I know what it is. Since your uncle is guaranteed not to go climbing into any strange time-travel machines or anything like that, and because there is no such thing, you certainly don’t mean a journey through time, but rather a journey to something very old. After all, your uncle trades in old junk!”

“In recycled materials, to be exact,” Peter added and then quoted the junk dealer Titus Jonas by skillfully imitating his voice: ‘Nothing’s so old you that you should just throw it away. Almost everything on earth still has another use and finds a new owner.’”

The three ??? laughed. Then Peter added. “Maybe our trip will take us to a museum where your uncle wants to buy something?”

Peter and Bob looked at one another. “So, it’s actually a journey somewhere to observe or explore the past,” Bob thought out loud.

Peter nodded. “What time are you talking about then, Justus?”

“A very, very long time ago,” Justus laughed. “In those days, creatures roamed the earth, who with one look would have made us tremble as much as the earth did beneath their feet.”

“Precisely!” Justus cheered jubilantly. “I just knew that you were the smartest detectives of all time. After me, of course.”

Bob grabbed a dusty cover from the heap of junk next to him and pulled it over Justus’ head, so that the leader of the three ??? disappeared in a cloud of dust.

“Just because you knew beforehand that your uncle had to go somewhere and we get to go with him, doesn’t mean you can brag about being a genius or something. What exactly is this all about anyway?”

Justus coughed and waved his hand in front of his nose. “Pull that dusty thing off me, Bob. I can barely breathe.” Then he said, “We’re going to a dinosaur park. The owner is an old friend of Uncle Titus and has invited him to go there for the weekend. When my uncle saw us working so hard earlier, he proposed to me that he takes us with him. That way, we can kill two birds with one stone: we can all finally stop cleaning up around here and instead have an exciting trip to a dinosaur park.”

An hour later, the three ??? were already on their way with Uncle Titus in his red pickup truck. The junk dealer hummed happily as he drove the truck north on the coastal road. After a lengthy journey, they reached an old wooden sign pointing inland. It had large blue letters on it: DRY LAKE - PAUL PRIMUS PIMBEL’S DINO PARK.

“Paul Primus Pimbel?!” Bob called out. “Is that your buddy, Mr Jonas?”

Uncle Titus nodded. “Yes, that’s my friend Paul. His parents loved to give their children such fancy names. I remember in school we used to make fun of the fact that Paul’s middle name was Primus, even though he wasn’t really the best student.”

“Primus is Latin and means first,” Bob explained to his friends.

“Exactly,” Titus Jonas nodded. “Paul worked in a limestone pit up here in the mountains when he left school, and then later, he took it over. One day, something truly extraordinary happened to him: he found a huge tooth in his limestone pit. At first, he thought he had discovered a crocodile tooth, but then more teeth and huge bones appeared in the limestone. Finally, he uncovered a whole dinosaur skeleton. That was the beginning of his dinosaur park.”

“A whole dinosaur skeleton?!” Peter gasped in amazement. “He didn’t sell it to a museum?”

“Oh, no,” Uncle Titus smiled. “He asked me for advice at the time and I told him that instead of earning money just once by selling the skeleton, he’d be better off making it into a tourist attraction. Paul had such fun digging up his skeleton that I knew right away that he’d found something here that he would enjoy all his life.”

“Besides, you know that once you’ve found one dinosaur, you’ll often find a second one nearby,” Justus added.

Justus shook his head. “Not really. Yet time and time again people find former mud holes or lakes, into which dinosaurs sank and disappeared. And one of these former lakes is right here too, Dry Lake. Supposedly, this lake was a natural trap for prehistoric animals. They sank into the soft mud at the lakeside and drowned in the water.”

“It’s the natural course of geological history,” Titus replied, “and for my old friend, it was actually a real stroke of luck. Paul has subsequently become a real naturalist. Since then, he has been searching for fossils and has discovered more really exciting things in his old lime pit. You’ll see it soon.”