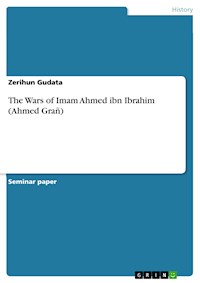 Seminar paper from the year 2019 in the subject History - Africa, grade: 12+, Haramaya University (Haramaya University), course: Medieval Ethiopia, language: English, abstract: There were many wars in the history of Ethiopia, but the most important and turning point was the wars of Imam Ahmed Grañ. It is regarded as the ‘"fundamental transformations"’ in 16th century, and the event that shaped the political, demographic and diplomatic courses of the horn in general. Surely, the wars of Ahmed have influenced every aspect of the lives of Ethiopian societies since then. From historiographical point of view too, the history of the wars of Ahmed was crucial and very important. Mainly because of its controversy, different historians of different time and place interpreted it differently. This leads to the emergency of very divergent outlooks regarding the wars and Ahmed himself. For example, the Somalis people celebrate him as a national hero, while the Ethiopians remembered him as a "bloodthirsty interloper.’" Nevertheless, in Ethiopia itself, it is difficult to find similar outlooks.