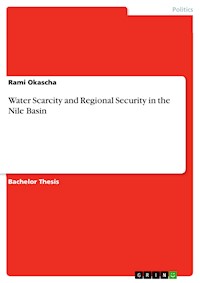 Water Scarcity and Regional Security in the Nile Basin E-Book

Bachelor Thesis from the year 2012 in the subject Politics - International Politics - Region: Near East, Near Orient, grade: 14,5 p., University of Marburg, language: English, abstract: Since South Sudan's secession in 2011 the Nile River is shared by eleven countries (Egypt, Sudan, South Sudan, Ethiopia, Eritrea, Tanzania, Uganda, Burundi, Rwanda, D.R. Congo, and Kenya) and is home to more than 160 million people. Five of these countries are among the poorest in the world, with low levels of socio-economic development or - in other words - with tremendously high potentials and motivation to socio-economically develop. Today, exploitation of the Nile has reached its limits with ever greater populations and industries depending on its waters. History has created political power structures which represent the exact opposite of the hydrological realites. Although the river receives no contributions from Egyptian territories, the country is the most excessive consumer of Nile waters and dependent on it for about 95% of its freshwater resources. At the same time, precipitation in the Ethiopian highlands delivers some 85% of the Nile's flow measured at Aswan. But the prevailing river regime in combination with a history of political instability has so far prevented Ethiopia and other upstream countries from constructing major schemes to facilitate economic development or even flood protection for its population. Will increasing resource competition lead the states of the Nile Basin to full-scale inter-riparian conflict? Egypt with its very limited availabilty of arable land and already over-exploited and contested water resources must consider to at least partially abandon its pursuit of food self-sufficiency and examine alternative ways of securing its population's needs. Given growing pressures on the Nile's resources, the Basin states' current order will have to fundamentally shift from the current lower-basin domination to a more integrative regional system that appreciates both the upperriparians' contributions and development needs as well as the lower-riparians' dependence upon their cooperation. Considering the most recent trends in scientific literature on transboundary water resources, this transformation is expected to be accomplished through cooperative action rather than resisted against through inter-riparian conflict. This paper argues that Egypt will, despite the repeated threats uttered against underdeveloped upstream states' claims for more equal shares, lose its hitherto dominant position and engage in cooperative efforts exceeding current frameworks like that of the World Bank's NBI.