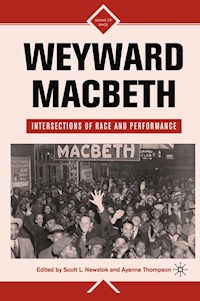 Weyward Macbeth, a volume of entirely new essays, provides innovative, interdisciplinary approaches to the various ways Shakespeare's 'Macbeth'  has been adapted and appropriated within the context of American racial  constructions. Comprehensive in its scope, this collection addresses the  enduringly fraught history of 'Macbeth' in the United States, from its  appearance as the first Shakespearean play documented in the American  colonies to a proposed Hollywood film version with a black diasporic  cast. Over two dozen contributions explore 'Macbeth's' haunting presence  in American drama, poetry, film, music, history, politics, acting, and  directing — all through the intersections of race and performance.