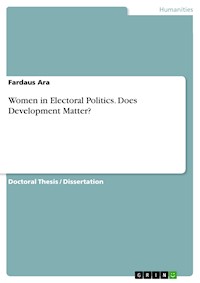 Doctoral Thesis / Dissertation from the year 2017 in the subject Gender Studies, grade: PhD, Murdoch University, language: English, abstract: This comparative study aims to analyse the issue of the underrepresentation of women in the national parliament and local government in Australia and Bangladesh. The empirical analysis consists mainly of data derived from semi-structured interviews with the elected female representatives from the parliament and local government in the two countries. This thesis finds that with few exceptions, women in Australia and Bangladesh have to overcome similar hurdles to their participation in elected office. Many proponents of modernization theory assert that economic growth leads inevitably to social development. Ronald Inglehart, Pippa Norris and Christian Welzel, in their revised modernization theory, claim that along with socio-economic development, modernization fosters cultural change that in the long run leads to greater gender equality in all sectors including politics. However, they have identified structural, institutional and cultural barriers to the political participation of women; cultural being the strongest force that sometimes resists gender equality despite economic development. Women are now participating in all sectors of politics. However, globally they are marginal in politics as candidates, elected representatives, ministers, the prime minister, political leaders, mayors and so on, regardless of the level of socio-economic development within countries. There is no country either developed or developing that has ensured equal participation of women in politics.