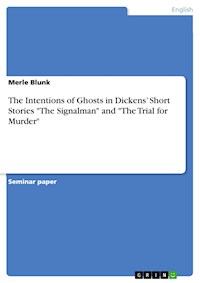 Seminar paper from the year 2016 in the subject American Studies - Literature, grade: 2,0, University of Rostock, language: English, abstract: Short stories dealing with gothic elements like ghost appearances in a spooky atmosphere are common for the Victorian Era. Some ghost stories entertain the reader in a surreal and scary, yet funny way. An example may be the story “The Canterville Ghost” by Oscar Wilde (Wilde 1963). As in the short story “The Haunted and the Haunters” by Edward Bulwer-Lytton (Bulwer-Lytton 1963), ghosts also constitute horror elements used to scare the reader. Hence, ghosts and their intentions differ substantially in literature varying from horror and humour to morality. Charles Dickens is a widely read author of the nineteenth century and well known for his descriptive and gothic influenced way of writing (Mulvey-Roberts 1998). This paper concerns the question: What are the ghost’s intentions in Charles Dickens’ short stories “The Signalman” and “The Trial for Murder”? To answer this question, the analysis begins by taking a closer look at the short story “The Signalman” which appeared as a chapter of Mugby Junction, an extra Christmas number of Dickens’ weekly journal All the Year Round in 1866 (Dickens 1997). Afterwards, the short story “The Trial for Murder” is analysed. This story appeared as a chapter of Dr Marigold’s Prescriptions, an extra Christmas number of Dickens’ weekly journal in 1865 (ibid.). Then the short stories are compared with regard to the ghost’s intentions and how they achieve their aims are comparted as the purposes of ghosts in literature are numerous. 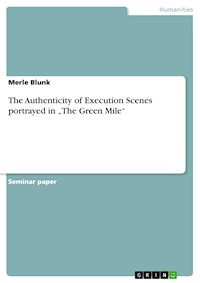