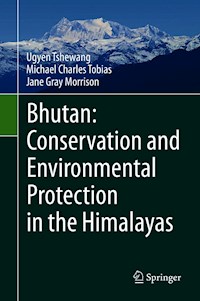 Bhutan: Conservation and Environmental Protection in the Himalayas E-Book

Located in the heart of the Eastern Himalayas, Bhutan practices the philosophy of Gross National Happiness (“GNH”) that embraces environmental conservation as one of the main building blocks for its sustainable development goals. Bhutan’s conservation strategies and success are largely driven by the strong political will and visionary leadership of His Majesty the King of Bhutan The nation’s Buddhist perspectives regarding a deep and abiding respect for nature; and the strategic enforcement of a wide-ranging stringent set of internal regulations and controls have helped ensure ecological gold standards in Bhutan. Moreover, the country is an active member of the international conservation community by fulfilling its implementation of various Multilateral Environment Agreements. While it emerged into the 21st century as one of the 36 global terrestrial “hotspots” in biological diversity conservation ranks, Bhutan’s sheer commitment with more than 51% of its territory being managed under the explicit status of a protected area network, and more than 70% of the land under forest cover, represents Bhutan’s exemplary dedication to protect the planet despite its smallness in size and economy, and the biological fragility exemplified by its hotspot situation.  In the face of imminent severe threats of global warming, Bhutan nonetheless exemplifies the truth that “a small country with a big conservation commitment” can make an enormous contribution to the global community.

At the regional level, Bhutan is intent upon protecting the Water Towers of Asia (that glacial expanse of the Himalayas) which is a critical resource bulwark for about one-fifth of the global population downstream in South Asia. Such protections invariably help mitigate climate change by acting as a nation-wide carbon sink through its carbon neutral policies.  In short, Bhutan has long represented one of the world’s foremost national guardians of biodiversity conservation, ecological good governance, and societal sustainability at a period when the world has entered the Anthropocene – an epoch of mass extinctions.

We envision this publication to be ecologically and ethically provocative and revealing for the concerned scientific communities, and governments. Through an extensive review of the scientific and anthropological literature, as well as the research team's own data, the Author's have set forth timely recommendations for conservation policies, strategies and actions. This book provides technical and deeply considered assessments of the state of Bhutan’s environment, its multiple, human-induced stressors and pressures; as well as extremely sound, practical techniques that would address conservation strategies in the Himalayas and, by implication, worldwide. 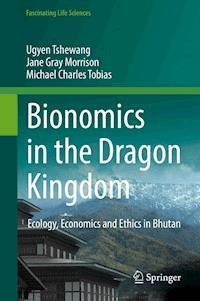