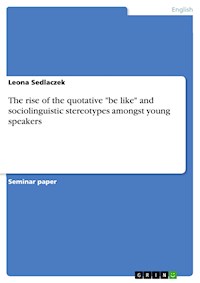 Seminar paper from the year 2020 in the subject English Language and Literature Studies - Linguistics, grade: 1,7, Christian-Albrechts-University of Kiel (Englisches Seminar), language: English, abstract: One hundred years ago, the quotative “be like” did not exist. Today, “like” ranks within the top ten words of linguistic corpora of teen language and “be like” is the most favored quotative of speakers younger than forty. Hence, the paper focuses on the quotative “be like” and its remarkable pathway of an emerging new linguistic feature of the mid-20th century to one of the core features of teen language and a potentially new standard quotative of the English language in general. Linguistic evidence for the rise of “be like” presented in this paper is mainly based on the findings of Canadian linguist Sali A. Tagliamonte who analyzed teen language on the basis of several corpora over the past decades. Her 2016 publication Teen Talk sets her apart from many other sociolinguistic studies on the quotative “be like” as a majority of them have been published in the late 20th century, rendering them partly out of date as “be like” is still on the rise. Tagliamonte’s work not only offers an insight into historic data but also takes the linguistic developments of the early 2000s into account which allows a timely assessment of the seemingly ever-changing quotative “be like”. In the second section of this paper, other linguists’ recent study results will be taken into account to assess “be like’s” status as a quotative of the 21st century. In a third step, differing sociolinguistic implications regarding “be like” will be illustrated by examining the sociolinguistic implications of “be like”. The paper hence aims at approaching possible answers to the question of how the rise of “be like” can be explained by illustrating different stages of development hinged on various generations of speakers based on Tagliamonte’s research. The current status of “be like” is assessed and put into context with popular culture and social media. The emergence of “be like” will be put into context with stereotypes about teenagers’ impact on language change as well as with the so-called Valley Girl phenomenon. By examining the sociolinguistic implications linked to “be like’s” current popularity, it will be shown that “be like” is not simply a phenomenon of teen language but might instead settle within the English grammar of the 21st century.