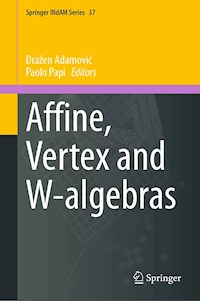 This book focuses on recent developments in the theory of vertex algebras, with particular emphasis on affine vertex algebras, affine W-algebras, and W-algebras appearing in physical theories such as logarithmic conformal field theory. It is widely accepted in the mathematical community that the best way to study the representation theory of affine Kac–Moody algebras is by investigating the representation theory of the associated affine vertex and W-algebras. In this volume, this general idea can be seen at work from several points of view. Most relevant state of the art topics are covered, including fusion, relationships with finite dimensional Lie theory, permutation orbifolds, higher Zhu algebras, connections with combinatorics, and mathematical physics. The volume is based on the INdAM Workshop Affine, Vertex and W-algebras, held in Rome from 11 to 15 December 2017. It will be of interest to all researchers in the field.