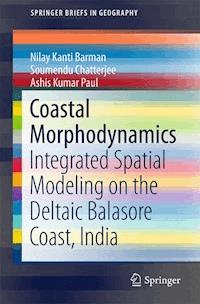 This book discusses the perceptions and sketches, geological background, materials and coastal processes of the East Coast of India. It also suggests strategies for effectively managing natural coastal processes in these areas. India has a coastline of about 7,516 km with a variety of coastal extensions, which developed at different time scales, producing permanent variations in the morphologies of the coastal areas through hydrodynamic, fluvial, aeolian and terrestrial processes. The book focuses on the Balasore coast, an area drained by three main rivers (the Subarnarekha, the Dugdeugi and the Burahbolong), which impacts the coastal morphodynamic processes of the area and accounts for their multifaceted nature.

Large drops or increases in the sediment supply within a short time span or over prolonged periods cause shoreline shifting. Eight satellite images from 1975, 1980, 1990, 1995, 2000, 2005, 2010 and 2013 were used to measure the shoreline dynamics, and a reference line was established using first order polynomial model with base data with 0.5 pixel root mean square error (RMSE) accuracy. The end point rate (EPR) model was adopted for estimating the future position of the shoreline. In order to assess the beach morphodynamics, the coastal modeling system (SMC) was used, which incorporates with a series of appliances and numerical models structured consistent with the space and time scale of the different dynamics affecting the littoral and beach morphology based on diverse thematic and reference documents. This study employed short-term analysis using the MOPLA module of the SMC system, which consists of three attached modules: the wave transformation module (Oluca), the depth-averaged currents module (Copla) and the sediment transport and morphological evolution module (Eros).

The shoreline dynamics findings show that the magnitude of erosion is higher in the northern part of the coastline in the left bank area of the Subarnarekha river estuary and in the estuarine part of the Dugdugi and Burahbalang rivers. The southern part of the shoreline near Rasalpur and Joydevkasba is relatively stable, and the study suggests that the current shoreline shift trend will continue in the future. The SMC model indicates that the wave height, significant wave height, current velocity and the potential transport of sediment at the Kirtaniya study point are high, while at Choumukh they are low and at the Rasalpur study point they are intermediate.