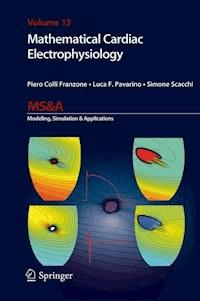 This book covers the main mathematical and numerical models in computational electrocardiology, ranging from microscopic membrane models of cardiac ionic channels to macroscopic bidomain, monodomain, eikonal models and cardiac source representations. These advanced multiscale and nonlinear models describe the cardiac bioelectrical activity from the cell level to the body surface and are employed in both the direct and inverse problems of electrocardiology. The book also covers advanced numerical techniques needed to efficiently carry out large-scale cardiac simulations, including time and space discretizations, decoupling and operator splitting techniques, parallel finite element solvers. These techniques are employed in 3D cardiac simulations illustrating the excitation mechanisms, the anisotropic effects on excitation and repolarization wavefronts, the morphology of electrograms in normal and pathological tissue and some reentry phenomena. The overall aim of the book is to present rigorously the mathematical and numerical foundations of computational electrocardiology, illustrating the current research developments in this fast-growing field lying at the intersection of mathematical physiology, bioengineering and computational biomedicine. This book is addressed to graduate student and researchers in the field of applied mathematics, scientific computing, bioengineering, electrophysiology and cardiology.