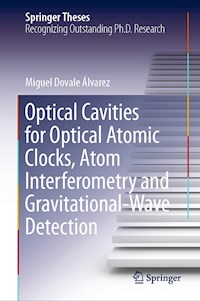 Devised at the beginning of the 20th century by french physicists Charles Fabry and Alfred Perot, the Fabry-Perot optical cavity is perhaps the most deceptively simple setup in optics, and today a key resource in many areas of science and technology. This thesis delves deeply into the applications of optical cavities in a variety of contexts: from LIGO’s 4-km-long interferometer arms that are allowing us to observe the universe in a new way by measuring gravitational waves, to the atomic clocks used to realise time with unprecedented accuracy which will soon lead to a redefinition of the second, and the matterwave interferometers that are enabling us to test and measure gravity in a new scale. The work presented accounts for the elegance and versatility of this setup, which today underpins much of the progress in the frontier of atomic and gravitational experimental physics.