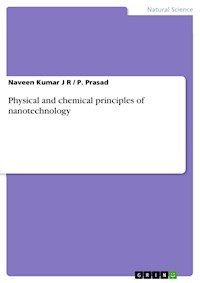 Document from the year 2019 in the subject Physics - Nuclear Physics, Molecular Physics, Solid State Physics, grade: A, , course: Nanotechnology, language: English, abstract: Physical and chemical principles of nanotechnology present the subject with the aim of providing information about Quantum Mechanics, Basics of Thermodynamics, Lattice Vibrations and Band Theory of Solids, Semiconductors and Tunneling & Colloidal Systems. This work is primarily intended to be a textbook for bachelor degree students in engineering, science and technology. This book has crucial role to play in the curriculum of all branches of engineering and technology. Quantum mechanics is a physical science dealing with the behaviour of matter and energy on the scale of atoms and subatomic particles/waves. It also forms the basis for the contemporary understanding of how huge objects such as stars and galaxies, and cosmological events such as the Big Bang, can be analyzed and explained. Quantum mechanics is the foundation of several related disciplines including nanotechnology, condensed matter physics, quantum chemistry, structural biology, particle physics, and electronics. The term "quantum mechanics" was first coined by Max Born in 1924. The acceptance by the general physics community of quantum mechanics is due to its accurate prediction of the physical behaviour of systems, including systems where Newtonian mechanics fails. Even general relativity is limited in ways quantum mechanics is not for describing systems at the atomic scale or smaller, at very low or very high energies, or the lowest temperatures. Through a century of experimentation and applied science, the quantum mechanical theory has proven to be very successful and practical. The foundations of quantum mechanics date from the early 1800s, but the real beginnings of QM date from the work of Max Planck in 1900. Albert Einstein and Niels Bohr soon made essential contributions to what is now called the "old quantum theory."