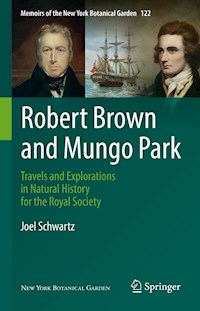 Explorer-naturalists Robert Brown and Mungo Park played a pivotal role in the development of natural history and exploration in the late eighteenth and early nineteenth centuries. This work is a fresh examination of the lives and careers of Brown and Park and their impact on natural history and exploration. Brown and Park were part of a group of intrepid naturalists who brought back some of the flora and fauna they encountered, drawings of what they observed, and most importantly, their ideas. The educated public back home was able to gain an understanding of the diversity in nature. This eventually led to the development of new ways of regarding the natural world and the eventual development of a coherent theory of organic evolution.

This book considers these naturalists, Brown, Park, and their contemporaries, from the perspective of the Scottish Enlightenment. Brown’s investigations in natural history created a fertile environment for breakthroughs in taxonomy, cytology, and eventually evolution. Brown’s pioneering work in plant taxonomy allowed biologists to look at the animal and plant kingdoms differently. Park’s adventures stimulated significant discoveries in exploration. Brown and Park’s adventures formed a bridge to such journeys as Charles Darwin’s voyage on H.M.S. Beagle, which led to a revolution in biology and full explication of the theory of evolution.