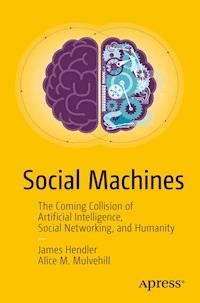 29,99 €
Will your next doctor be a human being—or a machine? Will you have a choice? If you do, what should you know before making it?
This book introduces the reader to the pitfalls and promises of artificial intelligence (AI) in its modern incarnation and the growing trend of systems to "reach off the Web" into the real world. The convergence of AI, social networking, and modern computing is creating an historic inflection point in the partnership between human beings and machines with potentially profound impacts on the future not only of computing but of our world and species.
AI experts and researchers James Hendler—co-originator of the Semantic Web (Web 3.0)—and Alice Mulvehill—developer of AI-based operational systems for DARPA, the Air Force, and NASA—explore the social implications of AI systems in the context of a close examination of the technologies that make them possible. The authors critically evaluate the utopian claims and dystopian counterclaims of AI prognosticators.
Social Machines: The Coming Collision of Artificial Intelligence, Social Networking, and Humanity is your richly illustrated field guide to the future of your machine-mediated relationships with other human beings and with increasingly intelligent machines.

What Readers Will Learn


Who This Book Is For
General readers and technically engaged developers, entrepreneurs, and technologists interested in the threats and promises of the accelerating convergence of artificial intelligence with social networks and mobile web technologies.