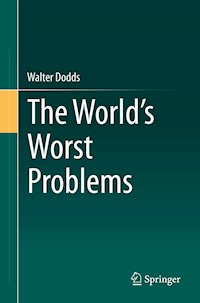 22,99 €
This book addresses the worst problems currently facing humanity and those that may pose future threats. The problems are explained and approached through a scientific lens, and categorized based on data involving global mortality, vulnerability, and threat level. The book presents indices of problem severity to compare relative intensity of current and potential crises. The approach avoids emotional argument using mainly empirical evidence to support the classification of relative problem severity. The author discusses multiple global problems and ranks them. He also explores specific solutions to each problem, links problems to human behavior from a social science perspective, considers international cooperation, and finally pathways to solutions.


The book discusses confirmation bias and why this necessitates a scientific approach to tackle problems. The moral assumption that each person has the same rights to life and minimal suffering, and that the natural world has a right to exist, forms the basis of ranking problems based on death, suffering, and harm to the natural world.  A focus is given to potential disasters such as asteroid collisions and super-volcanic eruptions, which are then presented in chapters that address specific contemporary global issues including disease, hunger, nuclear weapons and climate change. Furthermore the author then ranks the problems based on an index of problem severity, considering what other people think the worst problems are. The relative economic costs to solve each of these problems, individual behavior in the face of these problems, how people could work together internationally to combat them, and a general pathway toward solutions form the basis of the final chapters. This work will appeal to a wide range of readers, students considering how they can help the world, and scientists and policy makers interested in global problem solving.