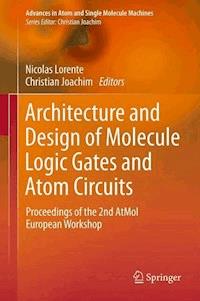 Have you ever puzzled over how to perform Boolean logic at the atomic scale? Or wondered how you can carry out more general calculations in one single molecule or using a surface dangling bond atomic scale circuit? This volume gives you an update on the design of single molecule devices, such as recitfiers, switches and transistors, more advanced semi-classical and quantum boolean gates integrated in a single molecule or constructed atom by atom on a passivated semi-conductor surface and describes their interconnections with adapted nano-scale wiring. The main contributors to the field of single molecule logic gates and surface dangling bond atomic scale circuits theory and design, were brought together for the first time to contribute on topics such as molecule circuits, surface dangling bond circuits, quantum controlled logic gates and molecular qubits. Contributions in this volume originate from the Barcelona workshop of the AtMol conference series, held from January 12-13 2012.