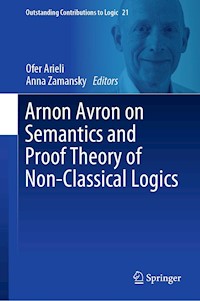 This book is a collection of contributions honouring Arnon Avron’s seminal work on the semantics and proof theory of non-classical logics. It includes presentations of advanced work by some of the most esteemed scholars working on semantic and proof-theoretical aspects of computer science logic. Topics in this book include frameworks for paraconsistent reasoning, foundations of relevance logics, analysis and characterizations of modal logics and fuzzy logics, hypersequent calculi and their properties, non-deterministic semantics, algebraic structures for many-valued logics, and representations of the mechanization of mathematics.

Avron’s foundational and pioneering contributions have been widely acknowledged and adopted by the scientific community. His research interests are very broad, spanning over proof theory, automated reasoning, non-classical logics, foundations of mathematics, and applications of logic in computer science and artificial intelligence. This is clearly reflected by the diversity of topics discussed in the chapters included in this book, all of which directly relate to Avron’s past and present works. This book is of interest to computer scientists and scholars of formal logic.