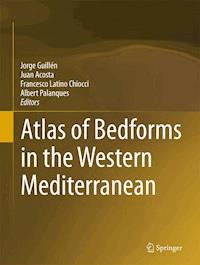 Atlas of Bedforms in the Western Mediterranean E-Book

213,99 €
This atlas illustrates the characteristics of present-day bedforms, from the shoreline to deep-sea environments, and it also includes short reviews of the main mechanisms that generate such bedforms. The atlas is aimed at the research community, in addition to students, the public at large and companies with interests in the marine environment. The book is divided into seven sections composed of a number of short chapters: 1) bedform analysis and the main physical processes, 2) bedforms in the coastal zone, 3) bedforms on prodeltas and sorted bedforms, 4) bedforms on the continental shelf, 5) bedforms and benthos, 6) bedforms in submarine canyons and 7) slope and deep-sea bedforms. This atlas offers a comprehensive, though not exhaustive, view of the diversity of bedforms and associated processes and of the morphological and temporal scales in the enclosed tideless western Mediterranean Sea.