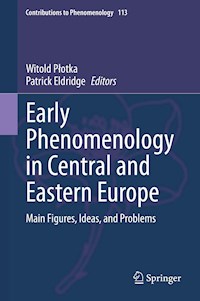 This book presents the origins of Central and Eastern European phenomenology. It features chapters that explore the movement's development, its most important thinkers, and its theoretical and historical context. This collection examines such topics as the realism-idealism controversy, the status of descriptive psychology, the question of the phenomenological method, and the problem of the world.

The chapters span the first decades of the development of phenomenology in Czechoslovakia, Poland, Romania, Russia, and Yugoslavia before World War II. The contributors track the Brentanian heritage of the development. They show how this tradition inspired influential thinkers like Celms, Špet, Ingarden, Frank, Twardowski, Patočka, and others. The book also puts forward original investigations. Moreover it elaborates new accounts of the foundations of phenomenology. While the volume begins with the Brentanian heritage, it situates phenomenology in a dialogue with other important schools of thought of that time, including the Prague School and Lvov-Warsaw School of Logic.

This collection highlights thinkers whose writings have had only a limited reception outside their home countries due to political and historical circumstances. It will help readers gain a better understanding of how the phenomenological movement developed beyond its start in Germany. Readers will also come to see how the phenomenological method resonated in different countries and led to new philosophical developments in ontology, epistemology, psychology, philosophy of culture, and philosophy of religion.