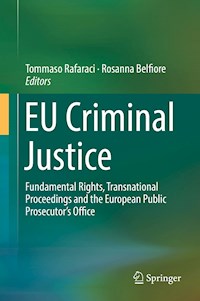 This volume discusses EU Criminal Justice from three perspectives. The first concerns fundamental rights following the adoption of the directives that have progressively reinforced the cornerstone of procedural rights of suspects and defendants in national criminal proceedings in the EU member states so as to facilitate judicial cooperation. The second perspective relates to transnational criminal investigations and proceedings, which are seen as a cross section of the current state of judicial cooperation in the area of freedom, security and justice, with the related issues of efficiency, coordination, settlement of conflicts of jurisdiction, and guarantees. The third perspective concerns the development of a supranational justice system in the light of the recently established European Public Prosecutor’s Office, whose European judicial nature still coexists with strong national components.