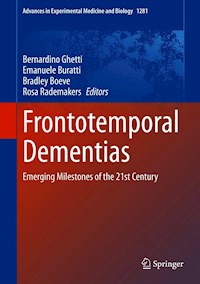 Under the name of Frontotemporal Dementias (FTD) numerous hereditary and sporadic disorders are listed. FTD may take away speech and language, social skills and ethical judgement, wishes and will, empathy and emotions; it may also impair motor functions. FTD may affect men and women in midlife or during old age leading to the demolition of the uniqueness of the human mind.

In the last decade of the 20th century and in the first two decades of the 21st century, progress in the understanding of clinical, neuropathological, biochemical, and genetic aspects of FTD has accelerated. The novel awareness about FTD has directed young generations of researchers toward the study of this complex group of disorders.

This Volume has been formulated with the participation of some of the leading scientists who have contributed to the development of knowledge in the clinical and basic science arenas. It captures the current central elements that are relevant to an up-to-date understanding of causes and pathogenesis of multiple forms of FTD.

The volume is an opus that represents a distillation of the work of many scientists and addresses the current directions in the study of one of the most complex groups of diseases. In view of its structure, the book could also be used as a textbook, that offers both a broad and deep analysis of major areas in FTD.

This book, planned by the International Society for Frontotemporal Dementias, is distinctive as it opens a window to a wide landscape about the biology of FTD.

Thus, the book represents a moment of reflection on the present state of our knowledge of FTD and a collective vision toward scientific progress. The authors of each chapter share their knowledge  and vision aimed at reducing the suffering which is caused by FTD.