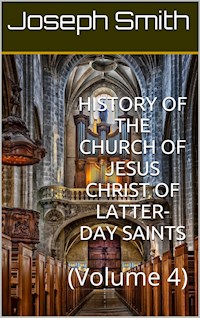 History of the Church of Jesus Christ of Latter-day Saints (Vol. 4) E-Book

Although Smith died in 1844, the compilation of his actions and words was not completed until 1856. Apostle Willard Richards was the chief editor of the work from 1841 until 1854. Apostle George A. Smith was the chief editor from 1854 until its completion in 1856. After Smith's death, apostle Wilford Woodruff allowed his extensive journal entries to be used to coordinate dates and clarify statements made by Smith. The completed work was read by and revised by church president Brigham Young and was published in 1858 by the Church Of Jesus Christ Of Latter-Day Saints under the title History of Joseph Smith.

Most of the material that resulted in History of Joseph Smith had been originally published in serial form over a 25-year period in the Times and Seasons, the Deseret News, or the Millennial Star.