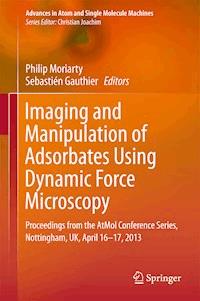 Imaging and Manipulation of Adsorbates Using Dynamic Force Microscopy provides an overview of the latest developments in dynamic force microscopy (DFM) of atoms, molecules, and nanoparticles adsorbed on solid surfaces. Significant advances in the capabilities of this technique have been made in the last decade and this book represents a timely snapshot of the major research themes in the field, with a particular focus on the manipulation of matter at the atomic and (sub)molecular levels. This edited volume will be of keen interest to researchers active in nanoscience and its various sub-fields including, in particular, scanning probe microscopy.  This book expands on the previous volumes in the series Advances in Atom and Single Molecule Machines. DFM is an exceptionally powerful tool for the imaging and probing of adsorbates on insulators and is now a component of the type of multiprobe interconnection systems described in Vol. 1 of the series. DFM can also be used to translate atoms and molecules in the context of the fabrication of the type of logic gates described in Vol. 2. When used in conjunction with STM, DFM also enables a detailed comparison of the chemical ‘architecture’ of a molecule with the spatial distribution of its orbital density, as described in Vol. 3. In this book readers will gain key insights into the current capabilities, and future potential, of dynamic force microscopy.