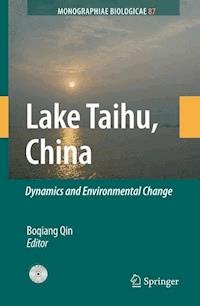 2 In China, there are more than 2,759 lakes with surface area greater than 1km , and 2 the total lake area is 91,019km . One-third of these lakes are freshwater lakes, and the majority are situated in the middle and lower reaches of the Changjiang River or in eastern China’s coastal areas. These lakes function as drinking water supplies, ood control systems, aquaculture and tourism resources, navigation channels, etc. Recently, many shallow lakes in China have been subject to rapid eutrophication and suffer from algal blooms. This issue has resulted in a shortage of drinking water and in degradation of their ecosystems. The control of eutrophication of shallow lakes is one of the main issues with which the local people and Chinese governments are concerned today. Lake Taihu is the third largest freshwater lake in China, with an area of about 2 2338km and a mean depth of 1. 9m, a typical shallow lake located in the delta of Changjiang River, the most industrialized and urbanized area in China. Its main function is supplying drinking water for the surrounding cities, such as Wuxi, Suzhou, and Shanghai, but tourism, aquaculture, sheries, and navigation are imp- tant as well. However, with economic development and increased population in the lake basin, Lake Taihu has suffered increasingly from serious eutrophication. The environmental issue of Lake Taihu is now a very common one, as most lakes from eastern China are confronted with it.