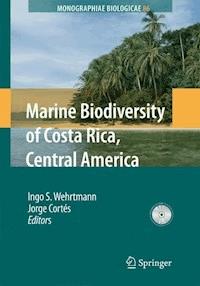 Life began in the sea, and even today most of the deep diversity of the planet is marine. This is often forgotten, especially in tropical countries like Costa Rica, renowned for their rain forests and the multitude of life forms found therein. Thus this book focusing on marine diversity of Costa Rica is particularly welcome. How many marine species are there in Costa Rica? The authors report a total of 6,777 species, or 3. 5% of the world’s total. Yet the vast majority of marine species have yet to be formally described. Recent estimates of the numbers of species on coral reefs range from 1–9 million, so that the true number of marine species in Costa Rica is certainly far higher. In some groups the numbers are likely to be vastly higher because to date they have been so little studied. Only one species of nematode is reported, despite the fact that it has been said that nematodes are the most diverse of all marine groups. In better studied groups such as mollusks and crustaceans, reported numbers are in the thousands, but even in these groups many species remain to be described. Indeed the task of describing marine species is daunting – if there really are about 9 million marine species and Costa Rica has 3. 5% of them, then the total number would be over 300,000. Clearly, so much remains to be done that new approaches are needed. Genetic methods have en- mous promise in this regard.