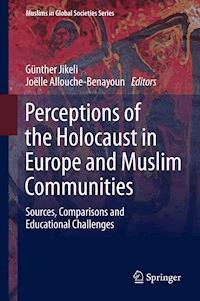 Perceptions of the Holocaust in Europe and Muslim Communities E-Book

The way people think about the Holocaust is changing. The particular nature of the transformation depends on people’s historical perspectives and how they position themselves and their nation or community vis-à-vis the tragedy. Understandably, European Muslims perceive the Holocaust as less central to their history than do other Europeans. Yet while the acknowledgement and commemoration of the horrors of the Holocaust are increasingly important in Europe, Holocaust denial and biased views on the Holocaust are widespread in European Muslims’ countries of origin.

In this book, a number of distinguished scholars and educators of various backgrounds discuss views of the Holocaust. Problematic views are often influenced by a persistent attitude of Holocaust denial which is derived, in part, from discourses in the Muslim communities in their countries of origin. The essays collected here explore the backgrounds of these perceptions and highlight positive approaches and developments. Many of the contributions were written by people working in the field and reflecting on their experiences. This collection also reveals that problematic views of the Holocaust are not limited to Muslim communities.