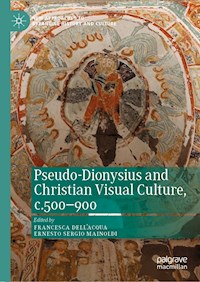 This book uses Pseudo-Dionysius and his mystic theology to explore attitudes and beliefs about images in the early medieval West and Byzantium. Composed in the early sixth century, the Corpus Dionysiacum, the collection of texts transmitted under the name of Dionysius the Areopagite, developed a number of themes which have a predominantly visual and spatial dimension.  Pseudo-Dionysius’ contribution to the development of Christian visual culture, visual thinking and figural art-making are examined in this book to systematically investigate his long-lasting legacy and influence. The contributors embrace religious studies, philosophy, theology, art, and architectural history, to consider the depth of the interaction between the Corpus Dionysiacum and various aspects of contemporary Byzantine and western cultures, including ecclesiastical and lay power, politics, religion, and art.