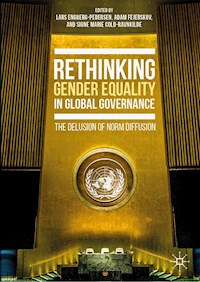 “A very valuable and much needed book on a central element in the processes of social change: the construction and reconstruction of social norms as they move between global and local levels.”
—Naila Kabeer, London School of Economics and Political Science, UK

“This book explores how gender equality norms are ever-evolving and argues convincingly that we cannot take their effectiveness, nor their acceptance, for granted.”
—Judith Kelley, Duke Sanford School of Public Policy, USA

“In an era of increasing resistance to gender equality, this is a much-needed volume that attends to how gender equality norms are interpreted and contested in governance organisations ranging from the UN and the EU to Mercosur and women’s NGOs in India and Uganda.”
—Ann Towns, University of Gothenburg, Sweden

This edited collection provides a new theoretical approach to the study of how global norms influence social processes. It analyses the institutional and highly political processes whereby actors – be they local, national, regional or trans-national – engage with global norms of gender equality. The editors bring together key thinkers who emphasise how context and history effect norm engagement and how particular groups and actors tend to be marginalised from discussions of global norms. By proposing a situated approach that underlines the contingent, multi-level processes that occur when actors interpret, use, manipulate, bend, or betray norms, notions of norm diffusion are fundamentally challenged. This book makes a further crucial contribution to the study of norms and gender equality in global governance by analysing very different empirical contexts, from New Delhi and St. Petersburg to the Organisation of American States, and from Kampala and New York to the European Union.