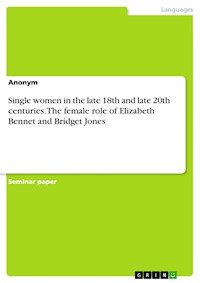 Single women in the late 18th and late 20th centuries. The female role of Elizabeth Bennet and Bridget Jones E-Book

Seminar paper from the year 2009 in the subject Literature - Comparative Literature, grade: 1,3, Leuphana Universität Lüneburg, language: English, abstract: We recognize that every single woman is waiting for the right partner who is secured by his fortune or heritage. But were the women really only neutral subjects with definite goals of becoming rich through a fortunate and suitable match or were they just suppressed by the power of money and the pressure of maintaining a right reputation? And how are women and their position in the 21st century society compared to the role and position of the women in the 19th century? Is it possible to compare these two kinds of positions at all? Those questions lead us to the main theme of the paper: being a single woman in the 19th and 21st century and the representation of this role in literature. An interesting illustration can be made at the example of the main character Elizabeth Bennet in Jane Austen’s novel “Pride and Prejudice” and the main character Bridget Jones in Helen Fielding’s “Bridget Jones’ Diary”.