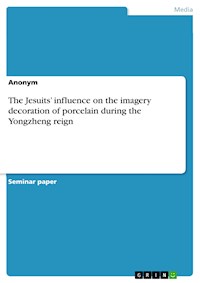 Seminar paper from the year 2015 in the subject Art - History of Art, grade: 1,8, , language: English, abstract: This paper examines the cross-cultural impact of Western styles on Chinese porcelain decoration, which not only aimed at a Western clientele but was produced for the local market and commissioners as well. In the eighteenth century during the Yongzheng reign (1723–1735) of the Qing dynasty (1644–1911) European Jesuits became part of Beijing’s court life and contributed to the imperial Chinese art scene. Their Western style influenced Chinese contemporaries and initiated changes in the decoration of porcelain produced for the emperor and his court. While the Jesuits who worked as artists at the court often picked up on Chinese narratives their artistic approach differed from their Chinese colleagues and resulted in new artistic manners and themes. Meanwhile, the trade with Europe flourished and contributed to the Chinese’s growing interest in European objects. This Occidentalism was the Chinese counterpart to Europe’s affinity with the Far East and likewise influenced the Chinese decoration on porcelain. This essay aims to examine the extent to which the Jesuits’ work at the court and their European training influenced the imagery decoration on imperial porcelain and to which extent the stylistic changes resulted from the Jesuits’ presence or from the side effect of the trade with Europe in the eighteenth century. First, it is important to understand the decorative manner of imagery themes before the Jesuits’ pronounced presence in the late seventeenth and early eighteenth century. Further, the essay attempts an overview on the artistic characteristics of the Jesuit art produced for the Qing court compared to the decoration on export ware for Europe. This section is followed by a stylistic analysis of four imperial porcelain wares of the Yongzheng period from the Percival David Collection and an examination of the visual influences that are found in their decoration. Finally, the essay summarises the analytical study and concludes with the consequential response to the essay’s question.