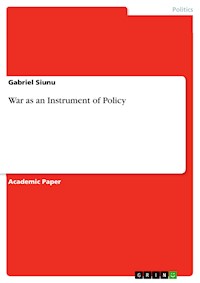 Academic Paper from the year 2021 in the subject Politics - International Politics - General and Theories, grade: A, , language: English, abstract: War as an Instrument of Policy examines the principles of war and how they may apply to the method of decision making in the higher realms of government when military and civilian leaders meet. It begins with an exploration of the emergence of a new kind of limited war beginning with the Vietnam conflict and discusses the principles of war along with typical military theory and strategy to clearly provide an understanding of the thought processes and actions behind the conducting of a war. Two contemporary examples, the Gulf War in 1990 and the South African invasion of Angola in 1987, provide the opportunity to examine the process of military decision-making on every level in these conflicts. Finally, methods of successfully and carefully employing a military methodology of decision making to capitalize on the success of war are suggested.