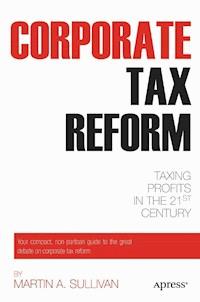 Corporate Tax Reform is in the air. Competitive pressures from globalization, as well as skyrocketing budget deficits, are forcing lawmakers to rethink how America’s largest businesses are taxed. Some want to close “loopholes.” Others want to end all U.S. tax on foreign profits. Some want to lower rates, while still others want to abolish the corporate tax altogether and replace it with an entirely new system. Unlike many other books on tax policy, Corporate Tax Reform: Taxing Profits in the 21st Century is not selling an idea or approaching the issue from a particular political slant. It boils down the complexity of corporate taxation into simple language so readers can make up their own minds about the future of this controversial tax. For too long, the issue of Corporate Tax Reform has been the exclusive domain of lawyers and economists who devote their entire adult lives to studying the tax. Corporate Tax Reform: Taxing Profits in the 21st Century opens the door on these issues to all concerned citizens by providing a compact guide to the economics and politics of the current debate on Corporate Tax Reform.