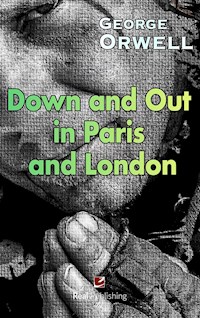 Down and Out in Paris and London E-Book

Down and Out in Paris and London is the first full-length work by the English author George Orwell, published in 1933. It is a memoir in two parts on the theme of poverty in the two cities. The first part is an account of living in near-destitution in Paris and the experience of casual labour in restaurant kitchens. The second part is a travelogue of life on the road in and around London from the tramp's perspective, with descriptions of the types of hostel accommodation available and some of the characters to be found living on the margins. 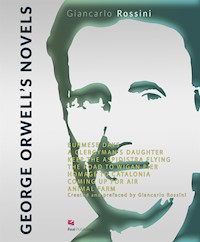 I lived in the Coq d'Or quarter for about a year and a half. One day, in summer, I found that I had just four hundred and fifty francs left, and beyond this nothing but thirty-six francs a week, which I earned by giving English lessons. Hitherto I had not thought about the future, but I now realized that I must do something at once. I decided to start looking for a job, and, very luckily, as it turned out, I took the precaution of paying two hundred francs for a month's rent in advance. With the other two hundred and fifty francs, besides the English lessons, I could live a month, and in a month I should probably find work. I aimed at becoming a guide to one of the tourist companies, or perhaps an interpreter. However, a piece of bad luck prevented this.

One day there turned up at the hotel a young Italian who called himself a compositor. He was rather an ambiguous person, for he wore side whiskers, which are the mark either of an apache or an intellectual, and nobody was quite certain in which class to put him. Madame F. did not like the look of him, and made him pay a week's rent in advance. The Italian paid the rent and stayed six nights at the hotel. During this time he managed to prepare some duplicate keys, and on the last night he robbed a dozen rooms, including mine. Luckily, he did not find the money that was in my pockets, so I was not left penniless. I was left with just forty-seven francs, that is, seven and ten pence.

This put an end to my plans of looking for work. I had now got to live at the rate of about six francs a day, and from the start it was too difficult to leave much thought for anything else. It was now that my experiences of poverty began, for six francs a day, if not actual poverty, is on the fringe of it. Six francs is a shilling, and you can live on a shilling a day in Paris if you know how. But it is a complicated business.

It is altogether curious, your first contact with poverty. You have thought so much about poverty, it is the thing you have feared all your life, the thing you knew would happen to you sooner or later; and it, is all so utterly and prosaically different. You thought it would be quite simple; it is extraordinarily complicated. You thought it would be terrible; it is merely squalid and boring. It is the peculiar lowness of poverty that you discover first; the shifts that it puts you to, the complicated meanness, the crust-wiping.

You discover, for instance, the secrecy attaching to poverty. At a sudden stroke you have been reduced to an income of six francs a day. But of course you dare not admit it, you have got to pretend that you are living quite as usual. From the start it tangles you in a net of lies, and even with the lies you can hardly manage it. You stop sending clothes to the laundry, and the laundress catches you in the street and asks you why; you mumble something, and she, thinking you are sending the clothes elsewhere, is your enemy for life. The tobacconist keeps asking why you have cut down your smoking. There are letters you want to answer, and cannot, because stamps are too expensive. And then there are your meals, meals are the worst difficulty of all. Every day at meal-times you go out, ostensibly to a restaurant, and loaf an hour in the Luxembourg Gardens, watching the pigeons. Afterwards you smuggle your food home in your pockets. Your food is bread and margarine, or bread and wine, and even the nature of the food is governed by lies. You have to buy rye bread instead of household bread, because the rye loaves, though dearer, are round and can be smuggled in your pockets. This wastes you a franc a day. Sometimes, to keep up appearances, you have to spend sixty centimes on a drink, and go correspondingly short of food. Your linen gets filthy, and you run out of soap and razor-blades. Your hair wants cutting, and you try to cut it yourself, with such fearful results that you have to go to the barber after all, and spend the equivalent of a day's food. All day you are telling lies, and expensive lies.

You discover the extreme precariousness of your six francs a day. Mean disasters happen and rob you of food. You have spent your last eighty centimes on half a litre of milk, and are boiling it over the spirit lamp. While it boils a bug runs down your forearm; you give the bug a flick with your nail, and it falls, plop! straight into the milk. There is nothing for it but to throw the milk away and go food-less.

You go to the baker's to buy a pound of bread, and you wait while the girl cuts a pound for another customer. She is clumsy, and cuts more than a pound. 'Pardon, monsieur,' she says, 'I suppose you don't mind paying two sous extra?' Bread is a franc a pound, and you have exactly a franc. When you think that you too might be asked to pay two sous extra, and would have to confess that you could not, you bolt in panic. It is hours before you dare venture into a baker's shop again.

You go to the greengrocer's to spend a franc on a kilogram of potatoes. But one of the pieces that make up the franc is a Belgian piece, and the shopman refuses it. You slink out of the shop, and can never go there again.

You have strayed into a respectable quarter, and you see a prosperous friend coming. To avoid him you dodge into the nearest café. Once in the café you must buy something, so you spend your last fifty centimes on a glass of black coffee with a dead fly in it. Once could multiply these disasters by the hundred. They are part of the process of being hard up.

You discover what it is like to be hungry. With bread and margarine in your belly, you go out and look into the shop windows. Everywhere there is food insulting you in huge, wasteful piles; whole dead pigs, baskets of hot loaves, great yellow blocks of butter, strings of sausages, mountains of potatoes, vast Gruyère cheeses like grindstones. A snivelling self-pity comes over you at the sight of so much food. You plan to grab a loaf and run, swallowing it before they catch you; and you refrain, from pure funk.

You discover the boredom which is inseparable from poverty; the times when you have nothing to do and, being underfed, can interest yourself in nothing. For half a day at a time you lie on your bed, feeling like the jeune squelette in Baudelaire's poem. Only food could rouse you. You discover that a man who has gone even a week on bread and margarine is not a man any longer, only a belly with a few accessory organs.

This, one could describe it further, but it is all in the same style, is life on six francs a day. Thousands of people in Paris live it, struggling artists and students, prostitutes when their luck is out, out-of-work people of all kinds. It is the suburbs, as it were, of poverty.

I continued in this style for about three weeks. The forty-seven francs were soon gone, and I had to do what I could on thirty-six francs a week from the English lessons. Being inexperienced, I handled the money badly, and sometimes I was a day without food. When this happened I used to sell a few of my clothes, smuggling them out of the hotel in small packets and taking them to a secondhand shop in the rue de la Montagne St Geneviève. The shopman was a red-haired Jew, an extraordinary disagreeable man, who used to fall into furious rages at the sight of a client. From his manner one would have supposed that we had done him some injury by coming to him. 'Merde!' he used to shout, 'you here again? What do you think this is? A soup kitchen?' And he paid incredibly low prices. For a hat which I had bought for twenty-five shillings and scarcely worn he gave five francs; for a good pair of shoes, five francs; for shirts, a franc each. He always preferred to exchange rather than buy, and he had a trick of thrusting some useless article into one's hand and then pretending that one had accepted it. Once I saw him take a good overcoat from an old woman, put two white billiard-balls into her hand, and then push her rapidly out of the shop before she could protest. It would have been a pleasure to flatten the Jew's nose, if only one could have afforded it.