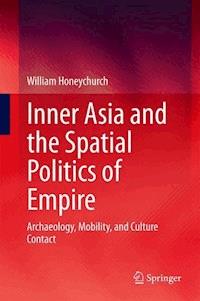 Inner Asia and the Spatial Politics of Empire E-Book

This monograph uses the latest archaeological results from Mongolia and the surrounding areas of Inner Asia to propose a novel understanding of nomadic statehood, political economy, and the nature of interaction with ancient China. In contrast to the common view of the Eurasian steppe as a dependent periphery of Old World centers, this work views Inner Asia as a locus of enormous influence on neighboring civilizations, primarily through the development and transmission of diverse organizational models, technologies, and socio-political traditions. This work explores the spatial management of political relationships within the pastoral nomadic setting during the first millennium BCE and argues that a culture of mobility, horse-based transport, and long-distance networking promoted a unique variant of statehood. Although states of the eastern steppe were geographically large and hierarchical, these polities also relied on techniques of distributed authority, multiple centers, flexible structures, and ceremonialism to accommodate a largely mobile and dispersed populace. This expertise in “spatial politics” set the stage early on for the expansionistic success of later Asian empires under the Mongols and Manchus.

Inner Asia and the Spatial Politics of Empire brings a distinctly anthropological treatment to the prehistory of Mongolia and is the first major work to explore key issues in the archaeology of eastern Eurasia using a comparative framework. The monograph adds significantly to anthropological theory on interaction between states and outlying regions, the emergence of secondary complexity, and the growth of imperial traditions. Based on this approach, the window of Inner Asian prehistory offers a novel opportunity to investigate the varied ways that complex societies grow and the processes articulating adjacent societies in networks of mutual transformation.